Things. Are. Happening. We are getting our album mixed by a professional mixer. Like… a fucking Grammy nominated professional mixer who has literally mixed stuff for  Beyonce and Pink and Usher and hella other seriously famous artists. He also mixes stuff for indie artists at a reduced price, IF he’s interested in the project. Well we sent him four of our songs and HE LIKED THEM! So much so that he gave us an even more discounted price! Amazing. It’s still expensive considering how poor we are, but it’s not much to pay for such a high end service. All in all, we are really excited about it. Like I’m really nervous but also excited. It’s just nuts. This project we spent so long on, now it’s really happening. I’m excited. And I’m super hyped over the fact that a dude who worked with BEYONCE listened to our music and liked it enough to take on the project and give us a special rate! Like oh man!! Oh shit!! That’s something for sure.

Hey kids and fake adults and self-soothsayers. I haven’t made a playlist for a million years, for a million different reasons, none of which I’m going to address. Other entries in other places are dedicated to my forlorn words. This right here is for music and good luck and light and the illusive beast known simply as the weekend. So here we are again, in the spring in the heat and the breeze and the rain if we get very lucky. Keep your fans blowing, your allergies in check, and try to enjoy the greening trees around you. Merry weekend to all, and to all a good Friday night.

3. Love & Rockets – Haunted When the Minutes Drag (Sounds like ’80s Depeche Mode in the best ways. Seriously, how is this not ’80s Depeche Mode? Also is this band what that one futurama episode is named after? I bet it totally is.)

My album. My album is fucking recorded. It’s done it’s done it’s fucking finished. My soul project, my sole project. It needs to get mixed and mastered but man but man, it’s fucking recorded. 13 songs lots with my vocals. My fucking lyrics and vocal melodies my fucking ukulele riffs extreme. When it drops, when this fucking thing finally drops, all y’all can have it for free. (Donations accepted and appreciated!) Ha, it’s nuts man. I’m really glad my vocals worked out for the last song we recorded. I wanted to be on that track, I fucking wrote the whole damn thing. Even though a professional stranger probably *could*have sang it better than me, it’s mine and I’m selfish and it’s my soul kid and my voice. I’m excited about this album you guys. It’s a bright spot in what is otherwise a highly stressful and generally shitty time happening around me. I’m holding on to it to help myself move forward. Keep my breathing bits above the water. I don’t even know. We aren’t even 100% settled on our band name right now, so that’s something we need to deal with before this happens. Also need to get a copyright for the whole thing. It’s nuts. A project my brother and I worked on for like 3 years, drawing to a close. And if I do say so myself, the final product is pretty fucking rad.

Haha dude I’m so fucking stressed out. This whole situation is killing me. My dad is going to make some calls tomorrow and try to help, but idk. Ugh I don’t want that fucking guy to come over here again. Trying to talk shit about the state of the apartment like he knows something. Fuck you, stay in your lane old man. It’s not just the noise tho. I fucking hate living so close to people that I fucking hate. Like they’re feet away from me even right now. It just doesn’t make me feel good, you know? It makes me feel shitty and stressed all the fucking time. Like I can feel bad vibes radiating through the walls. Idk. Idk fucking anything. I’ve got no fucking money, no real prospects, I need to do shit, make changes. I don’t know what to do. God I don’t want to deal with moving, with possibly staying with my parents for a while,  little to no privacy, ugh. Just…. Ugh. but this fucking blows too and I don’t have high hopes that it will change. but maybe it will. I’m kinda scared to see what happens when my dad calls these people. Idk. Idk. I’m sorry I can’t just fucking fix it. I’m sorry my degree is next to worthless and my freelance shit is so unreliable lately. It blows hard kids. Hard indeed. I’m trying to stay strong and shit but I don’t feel strong at all. I’m sorry. I’m so tired I really need to sleep please let me sleep.

It makes me feel physically sick. Fucking stressing myself to death, being hyper fucking vigilant every second listening for those sounds. Never being fully comfortable or relaxed in my own apartment. I don’t know what the fuck to do. I don’t fucking know. I have no money, no fucking money at all, and no current work and I don’t know when it’s going to come and everything feels fucking hopeless and dead and I feel sick to my stomach and mentally sick and so fucking tired and the whole situation just sucks wicked bad. I feel paralyzed. like how can we continue to live here like this? It’s not healthy. It’s not right. I’m so tired and I’m not really a robot, I feel everything.

Spending some more time recording at my parents house while they’re out of town. My s.o stayed home this time cuz he’s got stuff to do. Plus it’s good for us to be apart sometimes, like healthy n shit. or whatever. He eats like such a fucking bachelor when I’m gone. Sloppy joes and microwave dinners and canned shit. It’s pretty funny. I’ve been spending a LOT of time here, days and still a lot of days to go. but it’s been productive for the most part. My brother and I switched bedrooms, he’s in my childhood bedroom and I’m in his. When I moved out he took over my room cuz of my bigger bed. Then he moved out n they replaced his old bed with a futon. Usually when we both spend the night here we revert to our original rooms, but I hate the hard ass mattress they have in there now. So, I took over this room, put the futon mattress directly on the floor cuz the frame is the fucking worst. Made makeshift curtains to cover the window cuz I like to sleep later than 6am thanks and those weak ass blinds don’t cut it.

Basically made myself a cozy little nest since I’m stuck here for so long. Looking around the house you can tell we’re recording. The piano room, which usually houses a single piano currently has a shit ton of instrument friends.
Electric keyboard, electric drum set, bass guitar, two ukes and a mandolin. 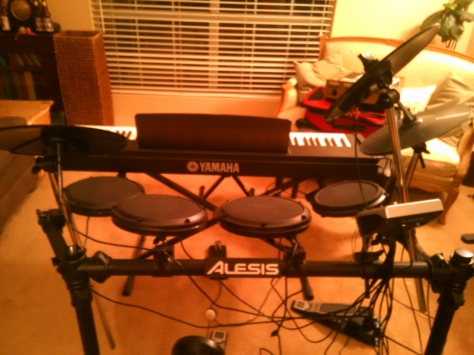 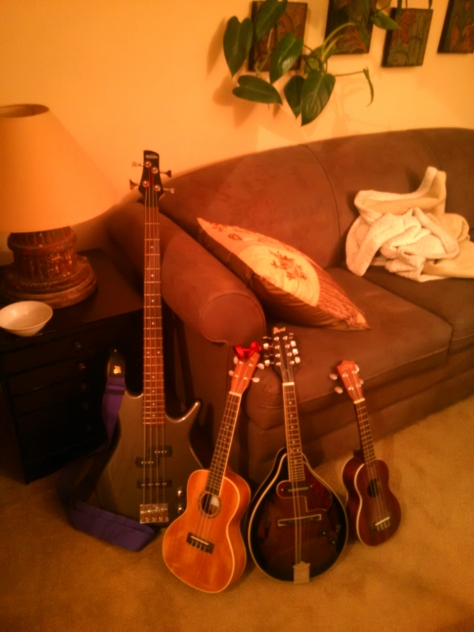 There’s an acoustic guitar around somewhere as well.
*changes into my jams*
Not to mention a lot of computer equipment and microphones and mic stands and so many fucking cords everywhere. Just an insane amount of cords. It’s a mess.
I hope I can actually sleep, here alone. Probably guna read a little and then hopefully pass out. the dogs are asleep so that’s good. I’m guna have a lot of time alone tomorrow, so I will try to be productive. Maybe take the dogs for a walk somewhere nice. idk. It could be fun. Okay, that’s it for me, signing off!