I applied for a bunch of freelance style jobs today, but I’m not super confident that any of them are legit, or that they’ll come through. I’m going to try more tomorrow and the next day and the next day. It’s fucking draining and I hate doing it. I really hate doing it. I can feel my soul dying as I’m tweaking my resume to better suit each thing I’m applying for. It was a beautiful rainy day and I went to the gym, but I forgot my headphones. I feel 1,000 ties more self-conscious, and 1,000 times less pumped up without them, so I made it a short one. I just did a mile instead of a mile and a half, and then a couple arm machines. We didn’t go to my parents house to carve pumpkins, which is usually the tradition, but stuff happened and it just fell through. I feel kinda sad about it tbh. empty, strange. (but to be fair, I was already feeling that way… sooo….) I got a pomegranate at least, which is part of the tradition. I’m going to call them tomorrow. We might order my new phone. I don’t know what else is going to happen tomorrow. I might stop by my brother and his girlfriend’s evening get-together, and hang out with all their beautiful dancer friends and feel like a giant weird potato, and use humor as a defense mechanism, and awkwardly follow my brother around because I suck at parties. (I made that sound **super** fun didn’t I??!) Also I have to dress up as something, and I don’t really have anything. (haha I could wear my fox ears I guess?? haha) So whatever. We’ll see. I’m going to play it how it plays, lay it how it lays. Just try and do my best. I’m not going to lie it’s been fucking hard. It’s been trying and confusing and unsettling and just fucking hard.

I take my broken heart out for a drive

just cruising through the city as it rains

and we don’t even try to talk because

between us there are no real words to say

I take my broken heart out for a walk

the droplets beat a rhythm fast and low

a rhythm that my dear heart can’t sustain

I spent a good portion of the evening in Santa Fe, having dinner with my brother’s girlfriend’s family. They invited my parents and stuff, just to be nice I guess? Since their daughter / step daughter has been living with my brother for a few months, which is pretty serious relationship stuff. They are really nice people, in a really beautiful house that they literally built themselves. Very liberal people, all in all I approve of them if my brother decides to marry her eventually. This was the first time I had seen them since our album came out, and they kept telling me how much they liked it and they thought my voice sounded good and I was just like… wow, thanks! Surprised and glad and really bad at taking compliments. It felt pretty awesome to hear them say all that stuff tho, people I barely know, with such warmth and honesty and enthusiasm. It was an injection of positivity at a time I really needed one. They have a lot of dogs and I let them all jump all over me. Held the small ones in my lap when they let me. Hugged everyone goodbye and felt [hugged]. Drove the long drive home in pattering rain, trying not to let my heart wallow in feelings like the bad old days. In thoughts like the bad old days (he hasn’t texted me back in over an hour I wonder if he’s fucking dead) I can’t be a robot through everything. My strength is a limited resource, even though I act like it’s not and in some adrenaline fueled moments feel like it’s not. I know that it is and sometimes I glimpse the edges (and as I do I am afraid.)

I need to go to the gym, and get snake food, and figure out the phone thing. I need to tweak my resume and apply for things. I need to set up my winter snake room soon soon soon.

Haha I am far too fucking tired. I’m getting way too fucking introspective about shit. Examining myself too closely. Going over every interaction I’ve had in the past few days with a fine tooth comb. Every word I said and how I should have said it differently. Quieter, less animated, less fake fake empty. How embarrassing is every little thing. Every gesture and word choice and every time something I do causes eyes to slide over to me. I wish my brain would let it go. Please, make the memory of this moment something else. Transform it. God, I’m so fucking tired.

After two nights at my parents house struggling to get comfortable enough to sleep I’m happy to be here in my own bed.It’s nice to be there tho. It still feels like home to me in a lot of ways, but not in an *its comfortable to sleep here* way. It’s nice to have a yard and dogs and outdoor privacy and light and space. It rained and rained and I took the dogs for a long walk by myself in the bosque. We walked by the alpaca house. 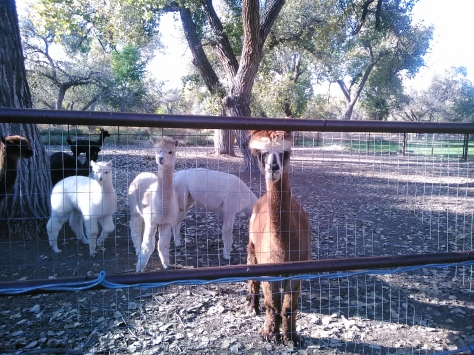 They are fascinated by the dogs and always come over to see us. They move as a heard and that panda face lookin’ guy is their leader. The dogs are a bit afraid of them I think.

I wish I had an app for exploding out all the shit that feels like it’s trapped inside of me. I wish I had an app that could put precise names to my emotions. I wish I had an app that could diagnose and cure. Hell I’d even pay for it. I’d watch a hundred hours of your adds for it. I feel like wet and dried paper. Stained and warped and eew it’s yellowing. But I’m the confident hostess at a moment’s notice. Mixing drinks and sure I’ll make it a double no problem! Of course I know how to make that I can make anything if you have the ingredients. I can’t even distinguish my real self I just can’t. I can’t pull it out of the milky light black.  And it’s been so so so so so very long since I’ve spent a full night truly alone. I think it could be good for me. I hope it will be nice we’ll see.

Wi-Fi is down, burning data hoping I can sleep soon. Luckily my 3M cloud library app has an offline mode so I can still read under the covers like a child. It’s an awesome app for people who have a library card and enjoy reading books for free. I surprised my parents tonight by showing up at their house after my mom semi jokingly invited me. They were all happy about it. It was pretty fun, I stayed for a few hours and helped them prepare the house for my aunt and uncle who are arriving tomorrow night. Things and thoughts and I feel pretty weird from lack of sleep… yet, here I am. I hope I can have some nice dreams. Please? That would be so lovely.

Honestly, I feel so relieved and humbled by everything that happened today. I am so loved. Unconditionally and deeply, profoundly. The same way I give my love. I’ve been so secret low, so low key dark recently and I just feel like today is a light spear, it can pierce me if I drop my shield.

Hey, hey, you know what’s fun? You know what’s super fucking fun? I’ll tell you what’s fun! I’ll tell you what’s just super fucking fun! You just sit back and relax and I’ll tell you what’s great great fun! What’s suuuper wicked fun is making only $8,964 for a full year doing freelance work, and having to pay $1,261 in self employment tax!!! That’s just fucking great!!! So fun! Hell yeah! So freaking awesome!! I love it!!! Being an adult is suuuuper fun!! The most fun ever!!! 10/10 highly recommend!!ii!!ii!!ii!!ii!! But seriously, I feel incredibly relieved to have it done, and incredibly fortunate to have a family that will help me stay out of tax jail. Even so, this was fucking brutal and seems like a hugely unfair amount of my meager income. it serves to further illustrate the point that I really fucking need to do something more/different with my life, and I think grad school is the right decision for me.